As a child I used to wonder what lurked beneath the floorboards. My uncle raised me, and my bedroom is in the cellar. It was laid out with these creaky floorboards. Of course, you can easily tell me now that it’s just pipes and dust. But as a child, I used to dream about a world under the floorboards. It started out as a pleasant and beautiful world of pixies and fairies but as I got older and my world became more of a hazardous and darker place, so did the world beneath.

The world of the floorboards became darker and grungier and whatever lurked beneath it didn’t bear to think about.

But I’d always hear it….

I’d hear whatever it was underneath the floorboards every evening….

Before I drifted off to sleep and the lights turned off, I’d hear the moans and groans of the demons stuck in some kind of phantom world underneath the floorboards. They would cry out frantically for help as soon as the night descended and when I used to scream and cry out in return, my uncle would assure me that I was the only one that heard the noises under the floorboards (and he’d usually give me a red behind – to make sure I never heard them noises again).

But despite my uncle’s heavy approach – every night I still heard whatever it was that was going on beneath the floorboards. The moans, the cries, the aches and pleas – it started to drive me insane.

As I got older, the voices got louder every night, until I eventually snapped and managed to steal a hammer from my uncle. I tore up the floorboards in the middle of the night. Ripping back every single panel of the floor until I could finally glare into whatever it was that was keeping me up all night. I pulled off every single floorboard with a vigour and determination to see what it was that had been tormenting me for the passed twelve months. I ripped the floorboards out one by one. I expected to glance down into the dark and misty world of my nightmares once the floor was ripped to pieces.

Except it wasn’t that at all. It was exactly what you expected underneath – pipes and spiderwebs and dust and rotting wood.

When my uncle came down into the cellar and saw the damage I caused, he was a picture of fury and anger. I got two of my teeth knocked out after this incident and let’s just say that I ended up being tucked in so tight every evening that I never had the chance to get up and look under the floorboards again.

Once I knew that there was nothing ‘fantastical’ beneath the floorboards, I slept a lot easier at least. I now wish I could see what the world was like above the cellar… whatever it is above the cellar is what now drives me insane.  The real world – they call it. 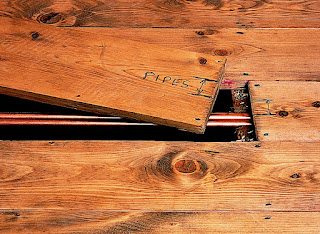