GETTING EVEN WITH GOD

It started like any other day for Father Duncan. He’d read his book in the confession box, in pure solitude and wait for confessions. Attendance and confessions were fleeting and Duncan enjoyed nothing more than sitting in an empty church, hiding from the nuns in the box.

Rapid frantic footsteps from the walls of the church gained urgency outside the confession box and Duncan was met by company besides the wooden partition.

“I need to get even with God.” A young man’s voice said.

What a strange way to phrase confession.

“I have done some terrible things.”

Duncan mutely laughed to himself. He’d heard them all. Whatever you can imagine, Duncan had heard - and that includes the unfortunate disgraces which are now synonymous with the church.

“That is what confession is for my child…”

“It has been twenty-six years since my last confession…” The voice uttered.

“And how old are you now son?”

“I’m twenty-six. I’d like to start from the beginning.”

It started innocuous enough. He called himself Frank (although Duncan would never ask) and Frank told stories of childhood vandalism, of adolescent sexuality and petty theft but it turned ominous as Frank approached his early adult years and the transgressive behaviour became a dependency - constantly seeking the next buzz. The pleasure of causing other people pain was indeed addictive.

Soon his confessions turned to animal cruelty, workplace bullying and finally it ended with stories about setting his ex-girlfriend on fire in the back of her car and driving his own car into the front of his parents house trying to kill his mother.

Duncan knew he had another fantasist on his hands, as the stories became more far-fetched and obscene.

By the time Frank was describing killing his parents and cannibalising their remains, he was in a flood of choking tears.

Frank sure was laying it on thick.

“This is a great many sins my child… I am bound by an oath to not repeat them. But this is a vast array of sins, you may never get right with God.”

“You misunderstood me Father.”

Frank punched through the partition and began to bang the priest’s skull against the hard wooden walls of the box. Frank artfully placed a hand around Father Duncan’s throat and the life drained from his face. Frank had his knife should the priest put up too much of a fight but they never do….

That was Frank’s sixth priest of the year. Frank walked over to the tabernacle and lit the candles. Frank said a prayer for all of his victims, he prayed that next time he’d skip the theatrics and just get to business, he even prayed to stop…

But Frank’s prayers are never answered… Perhaps he should stop praying to Satan. 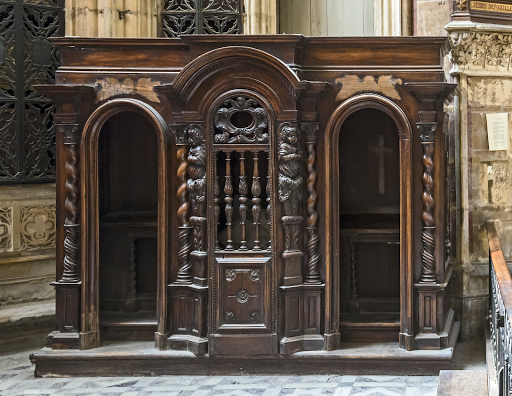