THE BEST HALLOWEEN COSTUME I EVER WORE

I love Halloween. I’m not a freak… I just love the idea of being scared, of winter nights and eery music. I love scaring someone crooked. My ex-wife Delia used to tell me I take things too far. She’d look at me with that contemptuous look of disappointment and say:

It’s just Halloween. You don’t have to overdo it.

Every year I did try to overdo. One year I had assembled bits of literal pumpkin together in order to make a life-size costume of a real pumpkin for our annual neighbourhood costume party – it was gross, disgusting, bits of pumpkin falling all over the floor in an ooze of orange pulp. I loved it!

The following year I’d made a wig out of real human hair and bought some second-hand babushka dresses and became – NORMA BATES. I kept jumping out at people using the toilet from behind the shower curtain (Norman Bates but in reverse) – reeer reeer reeer.

Maybe Delia was right, and I did over-do it but what’s the point of celebrating Halloween if you can’t go a little crazy. Well…. Last year ‘maybe’ I did go a tiny bit over the top. The costume was perhaps a bit too tasteless for the snowflakes of the neighbourhood and now this year Halloween is… well… cancelled…

I came dressed in the remains of human flesh… (Just kidding!) It was a sheep’s carcass. My uncle is a farmer and we had it preserved and the flesh was sterile before I put the suit on. The flesh was hanging from my face, my arms, my legs… It didn’t impress and I got kicked out and the neighbourhood said that either they cancel the event every year or I never get an invite ever again. So, that’s why Halloween is cancelled but I still think it was the best Halloween Costume I Ever Wore.

The doctor stared at the inmate…

“You wrote this?” The doctor said exasperated.

“Yes. You asked me to write why I am in here.” The inmate said.

“But you’re not in here because you wore a rotting sheep’s carcass to a costume party.” The doctor said.

“No, I asked you to write about how you ended up in this institute.” The doctor said.

“And I did!” The inmate screamed.

“I want you to finish the story.” The doctor said gently sliding the paper back to the inmate.

Ok, I guess what I just wrote wasn’t satisfactory for the fancy neuro-doctor in his fancy psychiatric institute. I will try to finish the story.

After the neighbours kicked me out of the party, I was pretty pissed, and I hate to admit it, but I have an anger problem.

I don’t regret it… After all, it was Halloween and the whole point is to SCARE. This was my homage to my favourite film – CARRIE.

I just wish Delia wasn’t inside the house as it burned…. 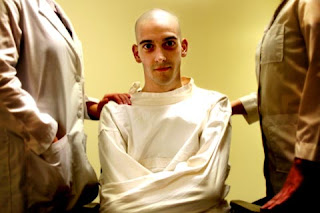