The milk and eggs were just for a spot of lunch…

Trevor was a meticulous man, rarely prone to human error. He turned all of the plugs off, turned the cooker’s ignition off, turned the electrical items off. He often took photos of the front door just to allay his anxieties and tell himself that it was locked. But this time; the window was ajar.

Trevor closed the door behind him, put the keys in, twisted it shut and shook the handle to ensure that yes, it was shut. He left the front door open once before – all day long… eight hours with the front door open. He got lucky. Perish the thought to do that again.

But… Trevor saw the crack of the window. He’s just popping to the shops. He’ll be back in a jiffy. Does he need to open the door again, go into the bedroom and close the window.

Just leave it open. He told himself.

He’s going to be gone fifteen minutes. MAX… Who could possibly do anything in that time?

He wasn’t gone fifteen minutes. The queue at the market was forty-five minutes. It was a Wednesday afternoon and the pensioners came out in full swing.

He was anxious as he stood in the queue. He knew that the window was open (not even open, it was ajar), but it played with his anxiety. Every second in that queue was a stab to the chest.

Until it was over.

Trevor was running across the road and up the stairs of the housing estate and into his flat. The window was still only ajar… All was well.

Putting the eggs and milk in the fridge, Trevor went to check on the bedroom where the offending window was. There were no signs of any entry. Or anything slipping through that window.

Trevor made his scrambled eggs; he took it on a plate and planned to go back to bed with his late late mid-afternoon breakfast.

Trevor was sitting up in bed with his plate when he dropped his mobile phone onto the wooden floor. Reaching down to pick it back up, his hand was covered in ketchup – from the scrambled egg, of course!

Did I drop some eggs on the floor?

Trevor placed the plate on the bedside table beside him. He put his head down to peer under the bed. There was a LOT of ketchup. More than what was on his plate. He reached under the bed to see where the spillage was. He felt something soft, furry and lifeless – it was Cuddles – it was his cat, drenched in ketchup.

He peered further under the bed and he… 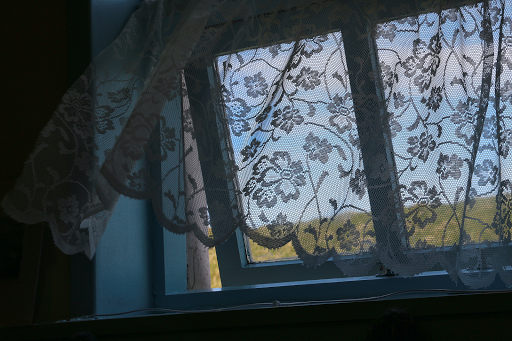