James was my best friend from college. I hadn’t seen him in fourteen years before today. But James was everything. The coolest kid that made everybody sing to the same tune... It was James that made me realise that I didn’t like women.

It was James that made me take up guitar - because he played the guitar. He was the coolest guy I had ever seen in my life and then he just disappeared. Rumours were that he was in rehab or travelling or in prison. And today, he stood at my door with that big smile and glistening eyes and said:

But something was off with the James that I knew. James had changed drastically.

The James from my varsity was bulky, tall and built of brick muscle. And here he was. Skinny. Big lumps sticking out from every angle of his body. He noticed me looking at them. The bulbous lumps hanging off of his shoulders and neck.

His teeth were rotten and that beautiful smile had been caved in with darkened shades of yellow and brown. His hair was greasy and covered most of his eyes. His eyes were shrunken and withdrawn and gaunt.

But he welcomed me into the varsity and I spent fourteen years thinking about him.

James took a seat in the corner. The bag of bones collapsed onto the sofa and almost sank into the thing.

“Where have you been?” I asked him.

“Everything is new. Everything in this world is a new horizon.” He said.

He seemed to have lost a lot, but not quite everything. He still had that hypnotic poetic nature about him which, despite appearances, created the mystique that was James.

“Remember the varsity?” He said.

“You were fantastic. You embraced everything about the varsity. You invested in it and it made you the beautiful man you are.” James said.

I blushed and it was true that the varsity saved my life. I was a withdrawn and socially anxious, depressed, suicidal wreck until James came and threw me deep into a social cataclysm which made me the man I am today.

“I will never forget what a willing student you are. And I want you to join my new varsity.” James said.

He held up his hand and on the centre of his palm was a dot.

A tiny, black amoeba that was drawing me in. It was beautiful. Effervescent.

“I came back after so many years for you Joe.” James said.

Back to the varsity. 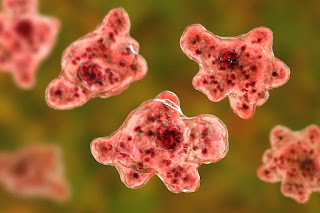