You wake up and see that you’re tied to a reinforced substance that binds you in all kinds of trouble.

You try to move your arms and legs and they just won’t budge. You try to flee and fly away from whatever is holding you down. You scream and nobody hears the scream because your scream is too muted to normal ears.

Is this a dream? Are you having a nightmare where you can’t move anything in your body? Do you even dream? You’ve never dreamt before?

You’re stuck. The substance is hard and sticky and it’s slowly engulfing your entire body. Rising up higher and higher to just above your head. You can barely breathe but you’re making buzzing noises to try to do something. ANYTHING.

This is horrific. The worst kind of fate.

And then you realize that struggling only makes it worse. The more you move the harder you’re stuck to this murderous blanket.

You need to stay still. The more you struggle the more you’re trapped. It’s that simple.

You try to recount what exactly happened to make you stuck here. Because you damned well can’t remember.

Yesterday you went all over the city. You had a lovely meal. You sat on the window for hours and just watched the sunrise and the birds fly and the people move about in their static and rigid ways. It was a lovely day for you.

Something got into your head and drew you to where you are now. And after that everything went blank and you woke up covered in some white goo and unable to move. What was this?

You lay still. You try to think of ways to escape. If you could free your arms and your legs then maybe you could make a jump for it. You look down and realize that you’re quite high up. Not that this has ever been a problem for you. High up is where you belong. But God knows what you could lose breaking free from this thing.

You turn your head one final time and there it is and immediately your fate makes sense. You had heard the stories and the myths and the legends and here you were facing something that you never believed to be true.

Eight legs, fangs and a large black torso heading towards you in a rampant burst of hunger. And that’s it - the end for you. It starts with your legs and your arms and it sucks them in, then your own body is being eaten and you’re still alive to see it.

The last thing you remember is your head splitting in two and your last thoughts are this:

Being a fly sucks. 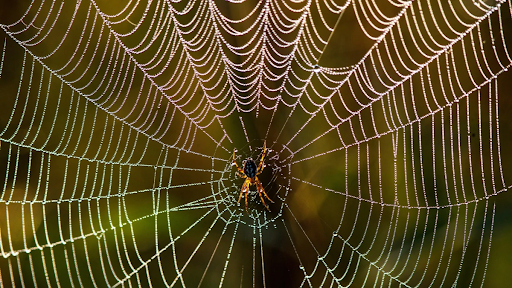